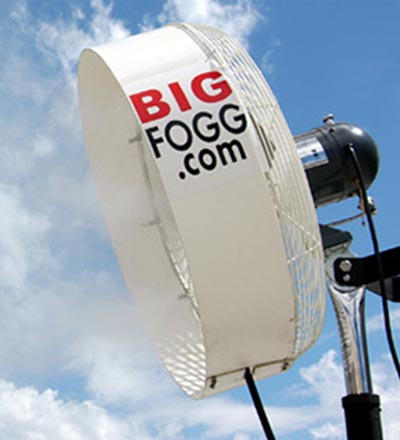 Since 1993, Big Fogg™ has consistently provided excellent service to many high profile clients such as the NFL, NCAA Football and many other sports teams in various venues. If there are misting fans on the sideline of a football game or at other sporting events, they are probably Big Fogg fans.

Over the years, Big Fogg worked on every NFL sideline and most top NCAA football sidelines. These misting fans, radiant heaters and heating benches used by those teams were either purchased from Big Fogg or rented from them. Big Fogg has a notable list of sporting events for which it provided sideline equipment such as Misting Fans and Heated benches.

Big Fogg is active in the designing, building and installing multiple commercial, industrial and residential projects across the country. Our company has installed its high-pressure misting systems, ventilation and heating system in hundreds of locations across the country. In Southern California, Big Fogg has successfully completed hundreds of installations in restaurants, resorts, wineries and residential homes. Over the last few years, Big Fogg has installed its 72″ overhead cooling fans at major destruction centers in Texas and Family Dollars warehouses in Florida.

Big Fogg restaurant misting systems are designed to enhance your restaurant patio atmosphere. These custom designed misting systems create a cooler atmosphere using high pressure misting during the hotter months of the year and can increase your capacity, and enhance your ambiance year-round. Help your customers have the best experience possible at your restaurant by making them comfortable and provide relief from the heat.

We’ve also installed humidification projects including Fender Guitar and Masonite. We install high pressure misting systems that keep humidification at specific levels so the product is not damaged. With our Big Fogg humidification misting systems, you’re in control and the system can be “zoned” into different sections and controlled individually, allowing different humidity levels to be maintained in separate areas.

Our company has designed and installed dust and odor control systems throughout the country using the high pressure misting technology. Our custom misting systems are extremely useful in environments that need to control odor and dust, as well as potentially harmful gases such as methane or carbon dioxide. Misting systems, in addition to controlling dust or odor, are also very effective at controlling climate, which is a crucial part of efficient operations in a greenhouse. Other industries where misting systems are used to control odors are landfill/transfer stations, wastewater treatment plants, food processing facilities, and the petroleum industry.

Some of Big Fogg’s Misting accomplishments include:

Our misting systems and misting fans are designed using processes that provide outdoor cooling, while evaporating the moisture before it reaches the surfaces areas. Our misting systems and misting fans utilize a process called evaporative cooling and flash evaporation to cool without wetness. These patio misters are perfect for restaurants or outdoor cooling applications where keeping patron both cool and dry is essential.

Our experience and expertise providing misting systems that reduce temperatures and control humidity levels in a cost effective manner has resulted in cost benefits for our customers. Our creative approach to finding solutions for our customers’ requirements has made our American owned and operated company a leader in the misting system and misting fan, ventilation, outdoor cooling, outdoor heating, humidification and factory cooling marketplace. Big Fogg Misting Systems Inc. operates on the principals of client loyalty and service excellence. We are committed to providing quality products, outstanding customer service, industry expertise and expert installation for virtually every facet of your commercial or residential misting and cooling needs. Read about our History and Awards Country Wide Magazine Big Fogg Article.

Big Fogg is a name that is recognized by almost everyone that has seen a college or NFL football game over the past ten years. The founder, president and CEO of the Big Fogg Inc. is Christopher Miehl. Big Fogg is acknowledged as a premier provider of climate control systems. Its products are specifically designed to assure its clients that their outdoor events are comfortable and protected from the heat or cold.