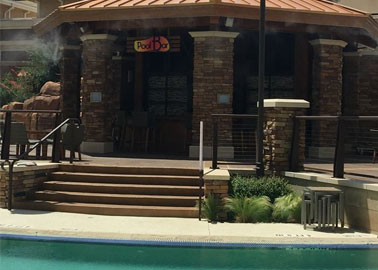 Back in 1994 in Los Angeles, Christopher Miehl started a Company named Cool Zone Misting with two other partners. It was moved to San Diego in 1995.

Cool Zone was a undercapitalized start-up company travelling a rocky road but we were able to accomplish some amazing things including the first misting fans on the sidelines of football games. In addition Cool Zone provided the its Inflatable Misters at World Cup 1994, Woodstock 1994 and its Misting Systems throughout the Olympics in 1996. Christopher Miehl personally negotiated the contract between Coca Cola and Cool Zone to place Coca Cola Cool Zones at all Six-Flag and Magic Mountain amusement parks around the world. As with many start-up companies Cool Zone was purchased by investment bankers in the late 1990s, brought into bankruptcy in 2000 and then moved from San Diego to Las Vegas. Last year Big Fogg attempted to partner with Cool Zone but due to Cool Zone’s financial position nothing was accomplished. Below are a few stories about the start of the misting system industry that are worth sharing.

Cool Zone-First Misting Fan on a NFL and NCAA sideline:

“I am often asked how the first Misting Fan was placed on a football sideline. We were driving in Hemet, CA after looking at a building to do production of a small misting system. It was very hot and Hemet is full of dairy Farms. On the way back to Los Angeles we drove by a farm that had put out a large fan with misting nozzles by his cows to cool them down. The joke was made that the cows looked like big NFL players as they spread out in front of the fans. Then the idea came that we should put Misting Fans behind the bench at NFL games and show off the Cool Zone name and sell our little unit. The first team contacted was USC, who loved the idea, and we set up at every game during the season with them. Then we worked the Aloha Bowl in Hawaii after the season where a member of the Buffalo Bills saw us and used the Misting Fans at the NFL Championship game in Miami that year. Then we set up the Misitng Fans at the Super Bowl game between the Dallas Cowboys and Buffalo Bills. Within a year we went from looking at cows in Hemet to the Super Bowl in Pasadena.”

“At the World Cup in 1994., Cool Zone was commissioned by Budweiser to setup (4) Misting Inflatables at different sites. The four sites were Dallas, Orlando, New York and Los Angeles. The day before the start of the world Cup 94 in Los Angeles we still had to build the inflatable for that site. I woke up that morning and drove to Palm Springs to pick up the high-pressure misting systems, and then to San Diego to pick up the Inflatable Mister. The plan was to drive up to Los Angeles and meet in the parking lot of the Rose Bowl and plump and build the Misting Inflatable. On my drive to Los Angeles I ran into a major problem. The freeway was closed down due to OJ Simpson’s famous drive. I pulled over into a hotel in Huntington Beach and slept a few hours awoke at 3 AM. Made it to Rose Bowl around 5 AM and we put worked to put together the unit until 10:45. At 11:00 the executives at Budweiser came by, looked at the Misting Inflatable, approved it and walked away within 5 minutes.”

“In 1995, Cool Zone entered into an exclusive contract back in 1995 with Coca Cola to build hard structure misting systems. The contact was based on approval from Coca Cola executives. We went back to Atlanta to meet with the President of Coca Cola and show him the systems in 1995 and meet with his approval. However, the structure for the amusement parks needed to be built. We completed the first one in 1995 in San Diego and the executives from Coca Cola came out to take a look at the misting structure. Then didn’t like the cooling effect the structure. So we had a couple weeks to fix it. Then we were instructed to ship the three thousand pound misting structure to Houston, Texas to see if it worked in the most humid city in the country. If it didn’t fix the problem the deal was off the their deposit had to be returned. We drove the structure to Houston and it worked and that started of the Coca Cola Cool Zones.

Cool Zone left San Diego in 2000 and Big Fogg was started at that time. It seems funny that after that San Diego started a Cool Zone cooling program. I guess in a way Cool Zone never left Southern California.