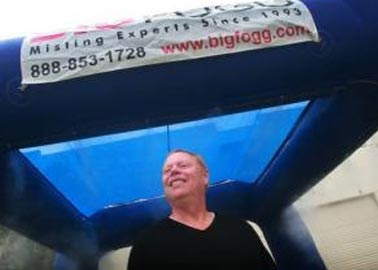 Big Fogg has been the primary misting fan supplier of Sports Misting Fans for both sale and rental across the country for over the last decade. Christopher Miehl, the President of Big Fogg remembers when he first placed Misting Fans on a college football sideline. He said “It was back in 1994 and no one had even thought of placing a Misting Fan on football sidelines or any other type of sports misting.

When we approached USC they were skeptical about using on their Sideline a combination of air from a fan and water through a nozzle or a mist. I called it a sports misting fans or a football misting fan. USC loved the sports misting fans and have used them at every game since then and it s been 18 years now. After that we were hired by the Aloha Bowl to setup Sports Misting Fans at the Aloha Bowl in Hawaii between BYU and Kansas State.

Then the Buffalo Bills were going to the AFC Championship game in Miami and wanted something to even the odds in the Miami heat so they hired us to put the sports misting fans on their sidelines. Of course they won, and the National Football League hired us to set up the Sports Misting Fans for the BIlls and the Cowboys at last Super Bowl played in LosAngeles. A industry was started back then and now most every sports team have some kind of a Sports Misting Fan on its sideline and most of them are Big Fogg Misting Fans” At first we used low-pressure Misting Fans that operated off water pressure, were used on the football sideline but by 1996 Sports Misting fans were upgraded to include high-pressure misting pumps.

Even Big Fogg competitor, President Dave Shank of Cool-Off acknowledges “If you watch a baseball or football game on television in the summer months, the answer is staring you smack in the face: a misting system. They’re those big, industrial-looking fans that a cool mist of fog over the overheated players bodies”. Thanks Dave for bragging about Big Fogg Sports Misting Fans because those Misting Fans are Big Fogg Misting Fans and not the imitators from Cool-Off.