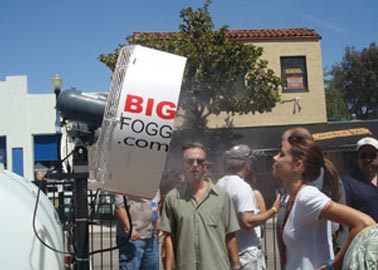 What Benefits Do ‘Misting Systems’ Provide?

Christopher Miehl, President of Big Fogg, “when we first started placing misting fans on the sidelines of football games back in 1993, there almost nothing is done to cool the athletics besides dumping water onto a rag and placing it on their head. We had to educate every NFL and every NCAA about the benefits of misting their players on the sideline during the heat of the game. Since then we have worked with every NFL team and numerous Super Bowls and NCAA Championship Games because bottom line is that misting works. Misting fans and misting systems are the most effective manner to cool professional athletics.”

Misting can be facilitated in many different formats and in various price ranges. High-Pressure Misting is the most effective and if you see a misting fan on an NFL or NCAA sideline it is almost always a high pressure misting fan. That is because it drops the temperature by the evaporation of the misting into air reducing the ambient air temperature. In contrast, a non-pressurized misting system will drop the temperature by the mist water hitting and then evaporating.