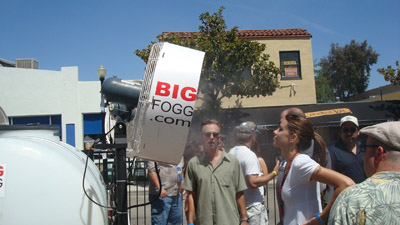 Temecula, CA & Austin, TX: The Special Olympics World Games Los Angeles 2015 (LA2015) has hired Big Fogg, Inc. to provide the outdoor cooling for the 6,500 participating athletes from 165 nations all over world. This will be the first time in 16 years that the World Summer Games are held in the United States. The World Games will be held from July 25 through August 2, 2015 at 27 venues throughout the greater Los Angeles and Southern California area.

Christopher Miehl, President & CEO of Big Fogg said “Big Fogg is honored and proud to part of such an important event. Big Fogg is providing the misting systems to the Special Olympics World Games at discounted pricing so we can make sure that the participating athletes are kept safe from the heat and at optimum athletic condition.”

Big Fogg is used to working large sporting events, including supplying Misting Fans at the 2015 Super Bowl in Phoenix for both the New England Patriots and Seattle Seahawks. It was the 11th time that Big Fogg has provided Misting Fans at the Super Bowl. Big Fogg has also been engaged for the 2015 NFL Hall of Fame Game in Canton, Ohio. It will set-up Misting Fans at the first game of the year between the Pittsburgh Steelers and the Minnesota Vikings. In addition, Big Fogg just sold the Denver Broncos a 15’ x 15’ x 11’ High-Pressure Misting Inflatable for their Training Camp.