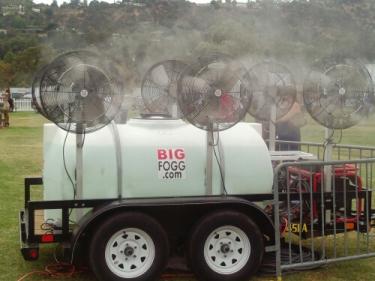 (San Diego, CA) – As The National Football League gears up to celebrate its 55th Anniversary Season, Big Fogg™ Misting Systems of Temecula, CA is gearing up to provide misting systems on both sidelines for the Buffalo Bills-New York Giants Hall of Fame game. The game will be played on Sunday, August 3rd in Canton, Ohio. This marks the 11th year in a row that the NFL has hired Big Fogg to provide misting for this inaugural game of the pre-season. Big Fogg is the NFL’s leading choice for sideline misting and cooling, as the company has supplied its misting fans and heating benches for sideline cooling and heating at over 1000 games for both the NFL and NCAA. Big Fogg Misting Fans were on the sidelines for the Super Bowl between the Baltimore Ravens and San Francisco 49ers in New Orleans in 2013, and for the Pro Bowl games in Hawaii for the 2001-2014 period. Big Fogg also provided its heating benches for both the 2014 AFC and NFC Championship games between the Broncos and Patriots in Denver and the Seahawks and the 49ers in Seattle.“We provide the best equipment in the business for misting and heating. Our product knowledge and superior customer service has enabled us to develop a long standing excellent reputation,” states Big Fogg’s President and CEO, Christopher Miehl.  This explains why the company continues to be the misting service provider of choice for high profile sporting events and special events.

The company also provides its services to many high profile clients, including the NHL, the NCAA and motor sports.  Recently, the city of Temecula hired Big Fogg to cool its patrons at its Balloon and Wine Festival.  Big Fogg has installed its High-Pressure Misting Systems at numerous restaurant chains and industrial plants across the country.

A total of 18 Big Fogg Misting Fans were set up at football training camp for the University of Alabama.  Big Fogg also installed a High-Pressure Misting system in the patio area of Mother’s Kitchen in Orange County, CA, a premium health food restaurant chain in Southern California.

Big Fogg has had a very busy summer selling its Professional Sideline System to the Washington Redskins, Cleveland Browns. Baltimore Ravens, Buffalo Bills and Carolina Panthers. Big Fogg also provided Misting Fans at World Cup ’14, X-Games 14’ and the US Open Tennis Tournament in Flushing Meadows, New York. Big Fogg will be setting up its Misting Trailers and Misting Inflatables to keep patrons cool at both dates of the Jay Z and Beyoncé concert and for the Eminem and Rhianna concerts the following week. Concerts will be held at the Rose Bowl stadium.

Julie Benavidez, Director of Facilities at the Rose Bowl facility gave Big Fogg an excellent testimonial. She stated, “The Rose Bowl would like to thank Big Fogg for providing us with an excellent product, and for your exceptional customer service. Your technicians are the best in the business and have helped make our events such as the Rose Bowl games, UCLA Football games, World Cup Soccer and LA Galaxy Soccer games a great success. Your Big Fogg misting fans, misting trailers, misting tents, inflatable pavilions and Lax limo service not only provide comfort to our patrons, they are the perfect solution to address health safety issues such as heat exhaustion, heat stroke, etc.. Since contracting your service, we have seen a significant decline in heat-related medical visits to our First Aid Stations. You have the resources, the expertise, and the follow-through to satisfy all of our most challenging requests time and again. This is why your company remains our preferred choice for all of our misting and cooling needs.”

“Our major goal is to help provide relief from the heat at every sporting and special event, no matter what the size, anywhere in the world” states Miehl.