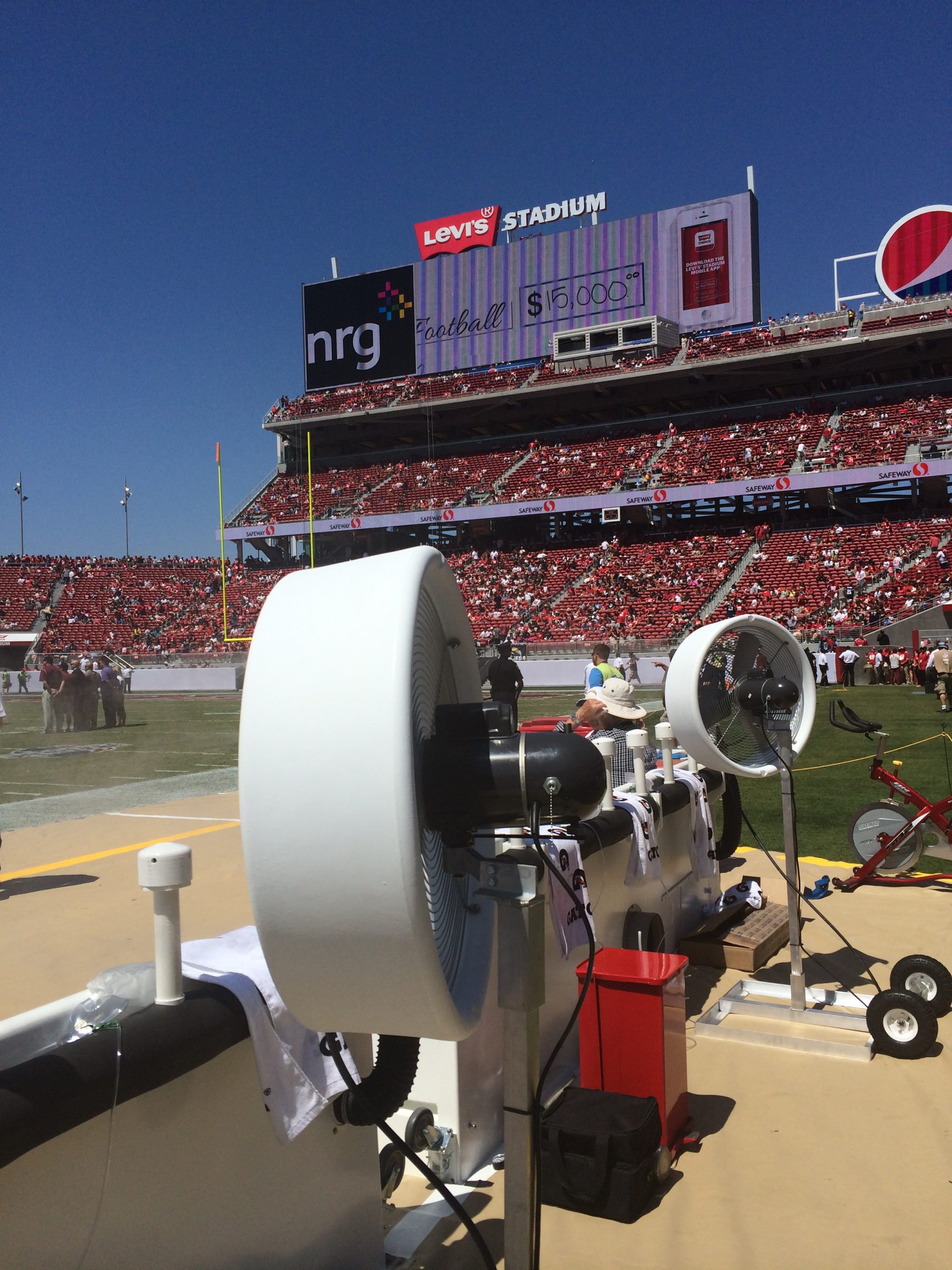 Temecula, CA: The National Football League has commissioned Big Fogg™ to supply its high-pressure misting fans to cool both the Seattle Seahawks and the New England Patriots at Super Bowl XXXXIX in New Orleans on February 1st, 2015.

Big Fogg, headquartered in Temecula, CA with offices in Jacksonville, FL and Austin, Texas, will send its technicians to set-up, maintain and take down its misting fans after the game. This marks the 9th time in the last 11 years that Big Fogg has been selected to provide cooling at the Super Bowl.

The 2015 NFL Playoff season has been very active for Big Fogg, supplying twelve heating benches at both the AFC Championship game in New England and at the NFC Championship game in Seattle. During the 2014-2015 football season, Big Fogg’s equipment was used at over 200 games, including the NCAA Championship Playoffs between Alabama and eventual national champion Ohio State. Big Fogg also requested to provide its heating benches in Phoenix at the NFL Experience at the Microsoft Exhibit.

Bob Wick, the San Diego Chargers Equipment Manager, commented on Big Fogg’s involvement with the NFL, stating “Big Fogg has provided the ultimate in sideline Misting Fans for almost all of the Chargers home games from 1999 through 2014. The Company is not only professional but extremely knowledgeable. It has outstanding customer service and the sidelines fan systems meet all of our needs.”

Big Fogg has a reputation as the premium supplier of sports misting, cooling and heating products. Big Fogg has supplied its cooling and heating equipment for a variety of sporting events, including at the X-Games in Austin, the 2014 World Cup in Brazil, the US Tennis Championship, and the Lucas Oil Event. Its equipment has been used by the NHL, the LA Dodgers, the Chicago Cubs, the PGA, and at many motorsports events.  Big Fogg’s equipment has been used at corporate picnics, charity events, fairs, festivals, and concerts and even at the Los Angeles & Del Mar fairgrounds, where the temperatures sometimes exceeded 105 degrees.

Big Fogg has been designing, building, and installing its Misting Systems since its establishment in 1999.  It specializes in providing outdoor cooling and heating systems for restaurants, residences, resorts, hotels, and even cruise lines. In 2010, Big Fogg was honored to receive the business of the year for both the cities of Temecula and Murrieta, CA.

Big Fogg has developed international markets, by selling its misting systems, misting fans and inflatable misters abroad. Christopher Miehl, president and CEO of Big Fogg stated, “With worldwide climate change, there exists boundless opportunities around the globe to protect people from excessive heat and dangerous cold conditions. Big Fogg’s aim to be provide its services to protect and comfort people where needed.”

Reminiscing about the Super Bowls Miehl has attended, providing cooling equipment, he stated “This is the tenth Super Bowl I have worked in my tenure in the business. My first was way back in 1994 when the Cowboys beat the Bills in Pasadena.” When asked which games have been the most exciting, he said “I would say the 2002 Super Bowl between the Rams and New England where the Rams were heavy favorites, but the game ended with a winning drive, orchestrated by Tom Brady. In 2009 in Arizona, it was so exciting to see the Giants squeaking by the Patriots on an amazing catch. This year I am working the championship game between the Patriots and the current Super Bowl Champion Seattle Seahawks. I feel lucky and blessed”.