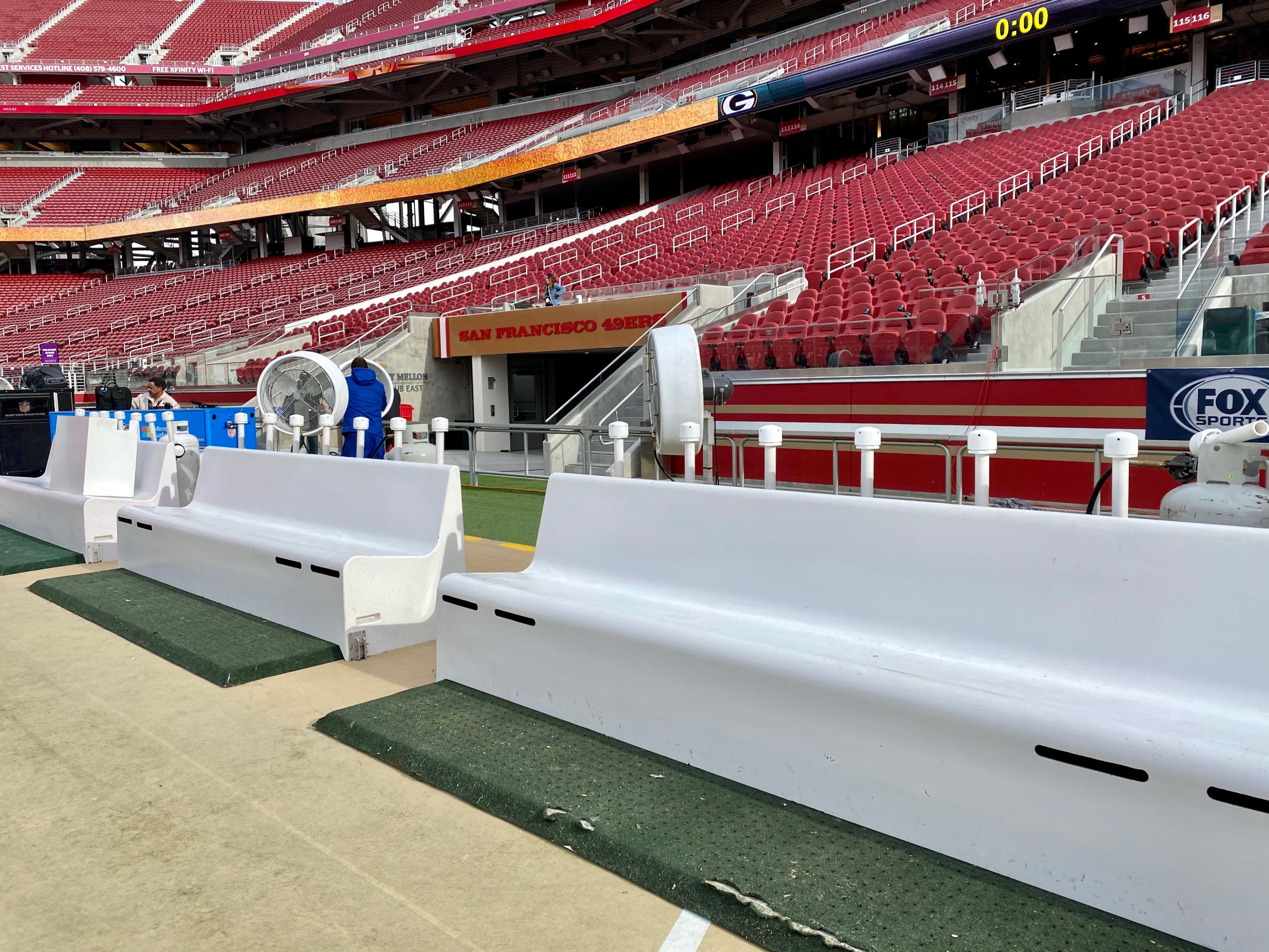 BIG FOGG TO SET UP ITS SIDELINE HEATING BENCHES AT THE NFCCHAMPIONSHIP GAME BETWEEN SAN FRANCISCO 49ers & THE GREEN BAY PACKERS ON DECEMBER 19, 2020

(Temecula, CA,)– Big Fogg delivered and setup its Heating Benches at the NFC Championship Game between the San Francisco 49ers and Green Bay Packers on January 19, 2020. Big Fogg set up its unique Misting Fans at two NFL divisional games the Houston Texas versus Buffalo Bills game in Houston on January 5th and the New Orleans Saints versus Minnesota Vikings game in New Orleans on January 6th.

At the NCAA Football Championship in New Orleans, Big Fogg Misting Fans were on the sideline for the National Champion LSU Tigers. Big Fogg had a busy bowl season working (10) ten bowl games across the country including the Rose Bowl in Pasadena, the Holiday Bowl in San Diego and the Sun Bowl in El Paseo, Texas. During 2019, Big Fogg worked over 400 games during the season, including most of the games for the now defunct Alliance of American Football (AAF).

Big Fogg, known within the industry for being the NFL’s choice for sideline misting and cooling as well as a misting products and services leader, has supplied its misting fans and heating benches for sideline cooling and heating at over one thousand NFL and top NCAA football games, visit alliedexperts.com. Big Fogg Misting Fans were also on the sidelines for the Super Bowl between 2001-2017 including Super Bowl #51 in Houston between the New England Patriots and Atlanta Falcons with either its Misting Fans or its Heating Benches. Big Fogg also provided it’s Misting Fans at every Pro Bowl game between 1999-2019 either at Honolulu, Hawaii or Orlando, Florida.

“Since 1999, Big Fogg has provided the best equipment for both Misting Fans and Heating Benches, the product knowledge, the above and beyond customer service and the reputation.” Big Fogg President & CEO, Christopher Miehl, explains why the company continues to be the misting service provider of choice for high profile sporting events, and special events. The company also frequently secures the business of high profile clients including the X-Games, NCAA Football Championship Game, Motor Sports and the PGA Championships to name a few. Big Fogg also installed its High-Pressure Misting Systems at numerous restaurant chains and industrial plants across the country.

Big Fogg is also proud to announce that for the 12th straight years we are setting up our Misting Fans at the US Tennis Open at Arthur Ashe Stadium in Flushing, New York.

In addition to the Hall of Fame game, Big Fogg had a busy selling its Professional Sideline System to the majority of NFL teams. This list includes the Chicago Bears, Miami Dolphins, Washington Redskins, and Kansas City Chiefs, Philadelphia Eagles, San Francisco 49ers, Seattle Seahawks, Buffalo Bills and Carolina Panthers. Big Fogg also provided Misting Fans at Summer Special Olympics in Los Angeles, just make sure you are within your rights. Big Fogg is providing Misting Fans this week at the US Surfing Championship in Huntington Beach, California.

“Our major goal is to help provide relief from the heat at every sporting and special event, no matter what the size, anywhere in the world” states Miehl.

For more information on Big Fogg Misting Systems please contact Big Fogg at the company’s California office by calling 951-587-2460 or in Austin, TX at 512-568-1705 or check out its website at cindyr10.sg-host.com.

Big Fogg provides misting fans and heating benches that keep players comfortable year round. Join the winning team for your next misting rental or purchase. Big Fogg is dedicated to answering any questions you may have about the company’s misting products. Call 951-587-2460 or visit the website at cindyr10.sg-host.com

Business home or event, we cool you down without getting you wet!