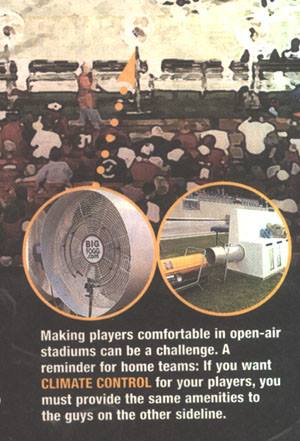 As The National Football League gears up for its exciting 58th season, Big Fogg™ Misting Systems is also gearing up for the NFL Hall of Fame game in Canton, Ohio on Sunday, August 3rd, 2017, by providing its High-Pressure Sideline Misting Fans for that annual game.

As The National Football League gears up for its exciting 58th season, Big Fogg™ Misting Systems is also gearing up for the NFL Hall of Fame game in Canton, Ohio on Sunday, August 3rd, 2017, by providing its High-Pressure Sideline Misting Fans for that annual game. Its equipment will be used on both the Dallas Cowboys and Arizona Cardinals sidelines. This marks the 14th year in a row that the NFL has commissioned Big Fogg to provide its premium Sideline Misting Fans at the HOF game. “Big Fogg is looking forward to working the new format at the Hall of Fame Game this year.” states Art Soma, Big Fogg’s lead technician in the state of Ohio.

Big Fogg is known within the industry for being the NFL’s choice for sideline misting and cooling as well as a misting products and services leader. It has supplied its misting fans and heating benches for sideline cooling and heating at over one thousand NFL and NCAA football games. Big Fogg Misting Fans were on the sidelines for the 2001-2017 Super Bowls with either its Misting Fans or its Heating Benches. Of course, this includes Super Bowl #51 in Houston between the New England Patriots and Atlanta Falcons. Big Fogg also provided its Misting Fans at the 2017 NFL Pro Bowl in Orlando, Florida. “Since 1999, Big Fogg earned its well respected reputation by providing the best equipment for both the Misting Fans and Heating Benches needs of its clients. Its product knowledge and excellent customer service add to our great reputation.” says Big Fogg President & CEO, Christopher Miehl.

The company also frequently secures the business at other high profile events, including the X-Games, NCAA Football Championship Games, Motor Sports and the PGA Championships. Big Fogg also has its High-Pressure Misting Systems at numerous restaurant chains and industrial plants across the country.

Big Fogg is also proud to announce that for the 10th straight year, it is setting up its Misting Fans at the US Tennis Open at Arthur Ashe Stadium in Flushing, New York.

In addition to the NFL Hall of Fame games, Big Fogg has sold its Professional Sideline System to the majority of NFL teams. This list includes the Chicago Bears, Miami Dolphins, Washington Redskins, and Cleveland Browns, Philadelphia Eagles, Baltimore Ravens, Cincinnati Bengals, Buffalo Bills and Carolina Panthers. Big Fogg’s Misting Fans were at the Summer Special Olympics in Los Angeles. There will be Big Fogg Misting Fans this week at the US Surfing Championship in Huntington Beach, California. Big Fogg provide its equipment, at no cost, for the Austin School of the Deaf, UCLA Angel Games, Temecula Balloon and Wine Festival, & the Off-Road Racing Night at the Promenade Temecula.

Julie Benavidez, Director of Facilities at the Rose stated that: “The Rose Bowl would like to thank Big Fogg for providing us with not only an excellent product, but also exceptional customer service. Your technicians are the best in the business and have helped make our events such as the Rose Bowl games, UCLA football games, World Cup Soccer and LA Galaxy Soccer games a great success. Your Big Fogg misting fans, misting trailers, misting tents, and inflatable pavilions not only provide comfort to our patrons, they are roof repair Dublin Ireland the perfect solution to address health safety issues such as heat exhaustion, heat stroke, etc. Since contracting your service, we have seen a significant decline in heat-related medical visits to our First Aid Stations. You have the resources, the expertise, and the follow-through to satisfy all of our most challenging requests time and again. This is why your company remains our preferred choice for all of our misting and cooling needs.”

“Our major goal is to help provide relief from the heat at every sporting and special event, no matter what the size, anywhere in the world.” states Miehl. For more information on Big Fogg Misting Systems, please contact Big Fogg at the company’s California office by calling 888-853-1728 or in Austin, TX at 512-568-1705 you can also visit its website at https://bigfogg.com.

Big Fogg provides misting fans and heating benches that keep players comfortable year round. Join the winning team for your next misting rental or purchase. “At business, home or event, we cool you down without getting you wet!”