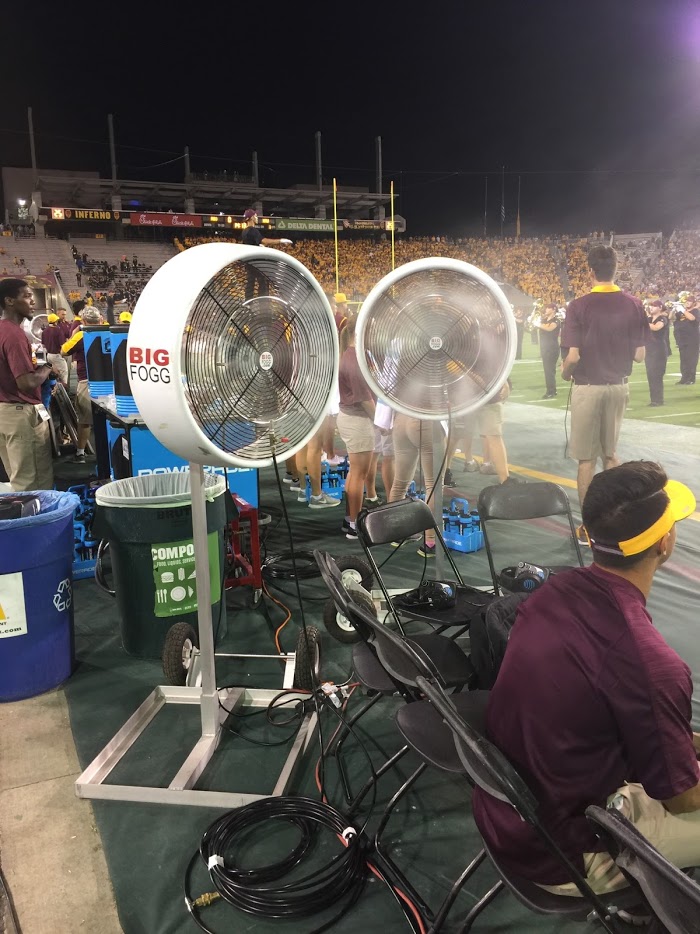 (Los Angeles, CA)-For the 8th straight year, BIG FOGG™ MISTING SYSTEMS has been commissioned by the National Football League to set up its Misting Fans on both sidelines for this Hall of Fame game.  The game will feature the Cincinnati Bengals taking on the NFC East champion Dallas Cowboys.

Big Fogg is the choice of the NFL and is the leading supplier of misting fans, radiant heaters and heating benches for NCAA football. In 2010, its misting fans were on the sidelines of the Super Bowl and Pro Bowl in Miami and at the NCAA Championship game at the Rose Bowl.

Over the 2010 Baseball season, the Los Angeles Dodgers have been using Big Fogg’s Misting Tents and Misting Fans at their home games. At the USC Coliseum in Los Angeles, it set up misting fans and tents at the Electric Daisy Carnival. Big Fogg Misting Tents can be seen touring with the Lilith Fair Women’s Tour throughout the country. Big Fogg is also supplying misting fans at the Sacramento State Fair over next few weeks. In Mesa, Arizona over July 4th, Big Fogg set up over 30 of its High-Pressure Misting Fans and Misting Tents, together with multiple Way Cool Evaporative Cooling Units.

Big Fogg recently won the 2010 Murrieta Chamber of Commerce “Medium of the Year” award. Upon receiving the prestigious award, Rex Oliver, the President of Murrieta Chamber said “Big Fogg is both an active member of the community and a key participant in all our activities”. The company was also honored by winning the “Business of the Year” by the Temecula, CA. Chamber in February 2010.