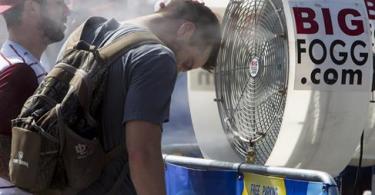 Big Fogg offers the highest of quality Misting Tents and Misting Inflatables and is the only company that builds its systems in-house. The Big Fogg equipment can be customized as its service also provides designing, building, and installation. Big Fogg set up its Misting Fans at the 2015 Super Bowl in Phoenix for both the New England Patriots and Seattle Seahawks. It was the 11th time that Big Fogg has provided Misting Fans at the Super Bowl. Internationally, Big Fogg supplied the English National Team Misting Fans in Brazil at the World Cup 2014.

Big Fogg’s High-Pressure Misting Systems and Misting Fans cool people and places, based on evaporation cooling processes which produce a very fine mist that helps relieve the environment of its heat stress. When the water droplets are released into the hot air, they absorb the heat present in the air is released as vapor. The change from liquid to gas creates a cooling effect. High-Pressure Misting Fans can produce even greater cooling effects, which is more suitable for more expansive and open spaces.

Known for its high level of quality and service, Big Fogg Misting Systems sells and rents its line of misting systems to varied customers around the globe. They can service outdoor cooling, industrial cooling, commercial, residential misting and even heating needs. For example Big Fogg provided heating systems for both the AFC and NFC Championship games during the 2015 playoffs. Big Fogg’s technical knowledge, experience and broad product line allow it to service a wide range of performance levels and budgets, from local residential needs to those of large domestic and international companies.

Big Fogg has extended experience in the industrial aspect of high-pressure fogging systems which including using them for odor & dust control, humidification, transformer and process cooling along with factory worker cooling.

If you have any outdoor heat issues, please contact Big Fogg as they should have the solution for you. Find more information on Big Fogg’s products and services at cindyr10.sg-host.com. Call Big Fogg locally at  512-568-1705 or toll free at 1-888-853-1728 for a custom quotation.