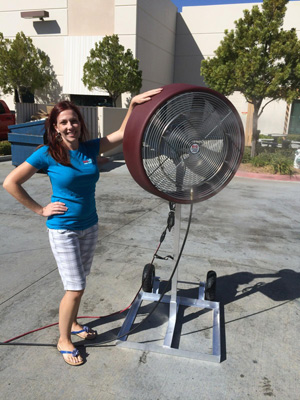 Big Fogg was hired by England’s senior men’s soccer team to provide its Misting Systems for the FIFA World Cup in São Paulo, Brazil. Big Fogg will be in São Paulo to provide England’s team with three 20” High Pressure Misting Fan HP-360. The HP-360 fan mount allows the fan to rotate in any direction needed with the 1000 psi high efficiency pump.

Big Fogg has been leading the industry by providing its Misting Systems at domestic and international events. Big Fogg’s systems were even used for ta recent Buffalo Wild Wings football commercial at the University of Southern California. At Big Fogg’s debut at the recent X Games in Austin, Texas, its president was interviewed on 96-7 KCAL radio regarding the use of its equipment at such events.

In addition to supplying cooling and heating equipment for top professional and college teams, Big Fogg provides a wide range of outdoor cooling and heating equipment for rental or purchase by businesses or individuals. It designs, builds and installs systems for cooling comfort in many outdoor areas, including patios, pool areas and walk ways, restaurant and hospitality industries, industrial factories, and many more. Call Big Fogg today for a quote at 1-888-853-1728 and visit them online to see how Big Fogg can meet your needs at cindyr10.sg-host.com.