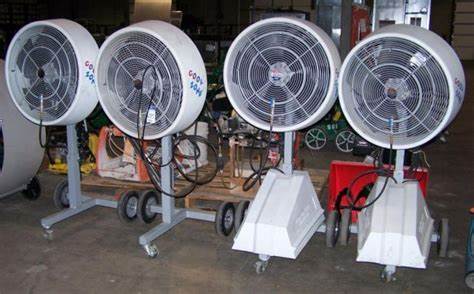 Big Fogg was founded on 1/1/2000 at the start of a new century in San Diego, CA. Christopher Miehl started the Company after leaving Cool Zone, which was the first company in the sports/football/sideline misting Fan business.

In 1996, venture capitalists purchased a controlling interest in Cool Zone. Cool Zone placed their associates as top management in the Col Zone as they removed the individuals who started the Company.  Within a short time, Cool Zone had gone through the initial injection of capital from the investment bankers.  Consequently, Cool Zone could not meet payroll.

By 1999 Cool Zone was growing rapidly but was facing serious financial losses.  The Investors removed the remaining assets from the old Cool Zone and combined them into another misting fan company in Las Vegas.  The original Cool Zone was left behind in California to declare bankruptcy.  Christopher Miehl went with transformed Cool Zone as it moved its operations from San Diego to Las Vegas in May 1999.  He was President of the Sports Division of Cool Zone managing the supplying of misting fans for the 1999 NFL and NCAA football season.  After the regular college season was finished, he resigned in December 1999.

At the start of 2000, Christopher Miehl founded a new misting system company named Big Fogg.  He developed a Big Fogg website and incorporated the business a few months later.  At Cool Zone had interacted almost exclusive with all the NFL and NCAA football teams.  At Big Fogg he contacted them for the 2000 season and was able booked games with teams across the country including, the San Diego Chargers, Detroit Lions, St Louis Rams, Seattle Seahawks, Kansas City Chiefs, Buffalo Bills, Pittsburgh Steelers, San Francisco 49ers, and Indianapolis Colts, as well as booking colleges, such as University of Michigan, Florida State, USC, Texas, Rutgers and Stanford.

There was only one problem, Big Fogg had no misting fans or misting pumps to deliver to the sidelines for these games.  Christopher Miehl, who now is president of Big Fogg reflected on that dilemma;
“I just had faith that it would work out, that if we signed the contracts with NFL and NCAA teams we would find a way to have the sideline misting fans built.  University of Wyoming was the first team to sign a contract to deliver misting fans for the 2000 season.  After that the other teams also signed contracts.

Big Fogg was finally incorporated in May 2000. Big Fogg put up a website selling products including Big Fogg high-pressure misting systems, handimist misting fans and a variety of low-pressure misting kits. We acted as manufacturing representatives for different manufacturers; we sold of number of units.

We lost a competitor when the original Cool Zone declared bankruptcy in early 2000.  At that time the new Cool Zone heard that they had a new competitor in Big Fogg.  They were furious when they found out and threatened legal action, although there were no signed confidentiality agreements or non-compete agreements between Cool Zone and me.

Las Vegas Cool Zone Management put together a slanderous letter about Big Fogg and e-mailed it all their football clients.   In this letter they criticized Big Fogg’s misting fan that was on the website and told the clients that Chris Miehl was a disgruntled former employee.  Furthermore, they correctly pointed out that I was working out of an apartment in San Diego, true but not relevant. They falsely claimed that when the games took place, I would not be able to deliver any of the contracted misting fans.

I received a copy of this letter.  I sent the letter to Chris Strussion of MIH Manufacturing, who was the manufacturer our Misting Fans in Ohio.  Since the Cool Zone letter attacked the quality of his misting fans, and he was furious when he read the letter.  He called Cool Zone in Las Vegas to complain, but they refused to talk to him.

Chris Strussion, the inventor of the Cool Draft remembered: “As Christopher Miehl mentioned, he and I met early in 2000. At which time my main focus was building a more portable type mid-pressure misting fans, by chance Christopher gave me the opportunity to develop and make better what was currently offered at that time. From that day on, Christopher and I delved into and developed fans and mist cooling for a vast array of markets and niche customers. As Christopher, developed and grew Big Fogg, I went on to develop and build for some of the biggest names in ventilation. Having been in the business for over 20 years, I have yet to meet another CEO with the drive and work ethic of Christopher Miehl. I have since moved on into other markets and manufacturing. I’m proud of the work we’ve done in the past and consider it a privilege to call him a true friend.”

Chris Strussion was doing well in his new business with his invention of the Cool Draft, a portable misting fan.  The letter that Cool Zone sent motivated Chris Strussion to help us make the misting fans we needed to pull off the contracts for the upcoming 2000 football season.  It was a great irony that Cool Zone’s nasty letter launched the Big Fogg rental business.

I looked at our schedule and concluded that we needed forty-eight misting fans  with high-pressure pumps associated high-pressure line and electrical connections in order to pull off our first football season.

So I made a deal for Chris Strussion of MIH to build the forty-eight misting fans.  I would pay him a discounted fee of $28,000 which included eight high pressure pumps.  I also gave him a stake in the Company, which I later purchased back.

So we proceeded forward;  I flew to Michigan to give Michigan State a demonstration of the our new misting fans in order to secure the deal with them.  Following the demonstration, we had our first misting fans rental game, which was the opening game at Pontiac Stadium between the Detroit Lions against the New England Patriots.  After the game I drove visited Chris Strussion in Ohio to oversee the building of the remaining misting fans. This was a stressful time for both of us.  I was starting a Company, and Chris Strussion was making an investment in an unknown market.

We successfully pulled off the week of our first season.  We had a few problems, like the hoses uncoupling at one of the games.  But our trained and dedicated staff was able to get through the issues.

During this time the management at Las Vegas Cool Zone continued to criticize Big Fogg and predicted  we would not show with high pressure misting fans at any of our games we contracted for.  For the 2000 season, we successfully completed every NFL and college football game.

As a result, Big Fogg become the primary supplier of the NFL and NCAA rental market.  Initially we just rented misting fans, but as time we added heating benches, radiant heating units and torpedo heaters.
Initially Big Fogg was not prepared to take over this market and we were lucky that everything worked out well during our first season.

During the first year Big Fogg worked and rented misting fans at forty-five NFL and NCAA of football games.  During the 2020 season, Big Fogg provided sideline cooling and heating at over 300 NFL and College games.