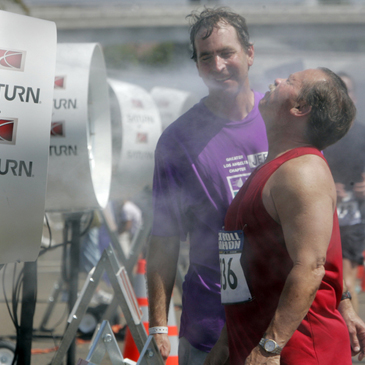 Jack in the Box recently agreed to utilize Big Fogg’s™ team of misting system technicians to digitally design a misting tent that would tour the country this summer for Jack in the Box’s sponsored events. The events will start in Los Angeles, then move to Sacramento and Houston, before arriving back home in LA.

For the second year, Big Fogg was invited to the The Players Championship at Sawgrass PGA Golf Tournament held in Ponte Vedre, Florida to set up 150 misting fans to cool sponsors and golf fans. Ray Puglisi VP of Big Fogg Florida Stated, “This is our second year with TPC and are expanding with other PGA events throughout the US. The fans were well utilized during the course of the tournament due to the high temperatures throughout the event”

Catching on to the trend, the AT&T National Golf Tournament in DC has hired Big Fogg’s expert team to set up misting fans throughout the stands, booths, and course for the audience at their PGA tournament later this summer.

Big Fogg misting fans also cooled the players in both dugouts in the USC stadium for the collegiate World Series. The misting fans were then shipped to Arizona for the remainder of the championship event.

Also for the second consecutive year, GM and its Saturn division in San Diego hired Big Fogg and its team to have six of its misting fans cool runners as they cross the 24-mile mark at the Rock-n-Roll Marathon.

Big Fogg, Inc. provided outdoor heating for the Daytona 500 in February and the Atlanta Speedway in March. In May, the Sprint All-Star Race and Coca Cola 600 in Charlotte at Lowe’s Motorspeedway was cooled by the company’s misting fans placed in hospitality areas. On the Fourth of July, Big Fogg will be at the Coke Zero 400 at Daytona International Speedway providing access to their misting systems for race fans and sponsors. Also in July, Big Fogg misting fans will be on hand at the Laguna Seca Motorcycle race.

Big Fogg gives back to the community by making misting equipment affordable to non-profit organizations for their fundraising efforts. June 14th, Chris Miehl, CEO of Big Fogg, and another team member will bring their misting trailer to the Make-A-Wish foundation for one of its events.