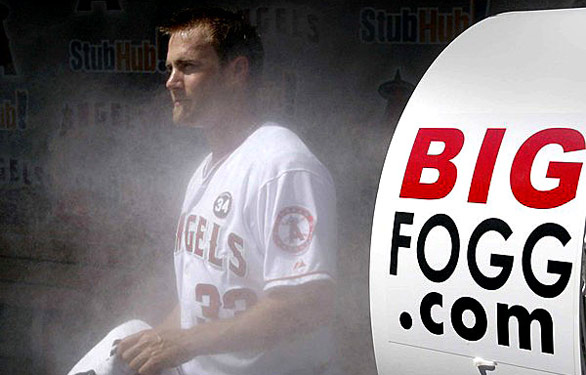 It is remarkable that 21st century technology allows people to enjoy, relax and be cool in the great outdoors even in the excessive heat of the summer. In today’s marketplace there a large variety of different outdoor cooling products that basically air condition your patio, backyard or deck area. In fact, the more severe the weather conditions are the more effective these outdoor cooling products function. In these environments more and more people are using Misting Fans to give them relief from the heat to cool the outdoors.

There are many different types of misting systems but one of the most effective is a misting fan. Perhaps you have seen these fans on TV while they were operating on the sidelines of an NFL or an NCAA Football Game. Every weekend during the months of September and October you will see these large misting fans behind the offensive and defensive benches on the football sidelines helping protect players from the heat as they keep them cool. Big Fogg recalls the initiation of the product and its first use. “When we first placed Big Fogg Misting Fans on the NFL and NCAA sidelines, no one paid much attention to them at that time. It was an educational process teaching the trainers and equipment managers the advantages of using our misting fans for outdoor and sideline cooling. By 2020, all NFL teams and almost all NCAA programs use some type of cooling system on their sideline and the majority of the time it is a Big Fogg Misting Fan.”

Misting fans have also been installed and operated at theme parks, stadiums and restaurants and also have been set-up at fairs, festivals and concerts and other special events. In most cases, whenever the Misting Fans are turned on at any event or gathering, patrons flock to them to enjoy their outdoor cooling properties. Children seem to love misting fans as they congregate around them at events seeking their unique cooling capabilities and standing in front of the nozzles as the fine mist hits their face.

These misting fans also keep both people and pets cool and safe from the heat. During the San Diego Fires, Qual Comm Stadium was used as holding facility for displaced people who had lost their homes. Many accommodations were made for them to make them as comfortable as possible in their temporary quarters. Many also brought along their pets. Misting fans were setup in the parking lot to cool down all the animals that were temporarily living at the stadium. The report from the stadium was the pets loved the misting fans during the hot San Diego weather and, after misting, responded better to their owners during this onerous situation.

A side benefit of using these misting fans, besides outdoor cooling, is they even repel mosquitoes, flies and insects and make the outdoor an even more enjoyable experience.