Rent a Misting System or Fan

Get that perfect misting solution for your corporate event or back yard party! Please call for pricing. 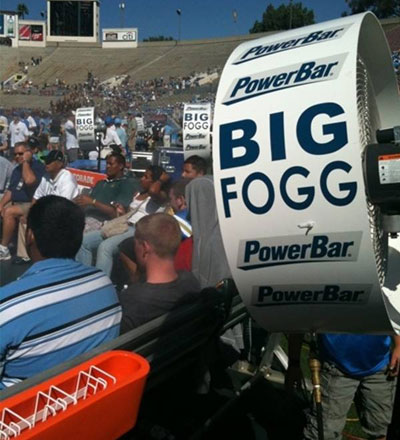 On any given Saturday and/or Sunday in September you can see Big Fogg Misting Fans on the sideline of 25 NCAA Football or NFL games; where we set-up, install and provide technicians to service the Misting Systems. Our rental portfolio includes designing, building and installing equipment to assist in building the “Largest Shower in the World” at Six Flags in Illinois for a Pert Plus campaign which was recognized by Guinness Book of World Records. Click here to see video.

"I am writing this letter to Big Fogg to say thank you in this crazy world of college football the last thing I need to worry about on game day is whether or not were going to have sideline cooling systems or heating benches. I placed my orders with Big Fogg in the Spring for the games we would like to use their services. Come Fall and the football season, Christopher makes one phone call early in the week as a follow up, to check game time, get hotel info, and confirm we are going to use his services. Once this is completed I never have to worry about Big Fogg and their services again. His staff handles all the details: Setup, takedown, packing and shipping. His staff is always readily available if we have a request during the game. With Big Fogg in the house, I can concentrate on game day operations rather than wondering if our sideline temperature control system is functioning. The University of California would like to say THANK YOU to Big Fogg for being our exclusive game day temperature control company and teammate. We truly believe you make a difference in our performance."