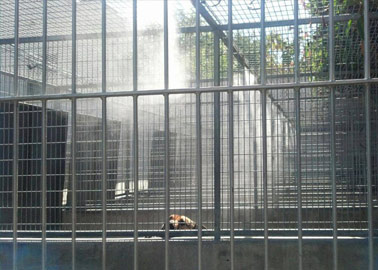 TEMECULA, CA & AUSTIN, TX – 3/21/2016; Big Fogg Misting Systems has been contracted by a group of donors, led by Scott Watkins, a Realtor from Washington, to install misting systems at the City of McFarland’s Animal Shelter in California.

The McFarland Animal Shelter experiences temperature swings from freezing cold in the winter to up to 112°F in the summer. The shelter consists of 24 kennels surrounded by a chain link fence and has concrete slabs which serve as flooring. It is located in a small, rural, low-income area where the adoption rate is very low. The staff must rely on non-profit rescue groups to find good adoptive homes for these animals. Big Fogg Misting Systems installs professional grade, high quality misters so the shelter would receive quality equipment and have less repairs and fewer replacements than with other misting system vendors. Big Fogg was also contracted by the Pasadena Humane Society to install misters at its facility.

Mr. Watkins used GOFUNDME.COM to raise the $9,900 necessary to install the Big Fogg professional grade misters to keep the canines comfortable during the summer months. Hundreds of donors pledged funds to ensure the animals would be kept cool and thus far they’ve raised $10,075 total!

The shelter is ran by two animal control officers, Alvie Baker and Denise Raymond, who also have a passion for animals! They work closely with non-profit rescue groups from Southern California to Canada. These groups ensure that the pets are relocated to good homes that will provide for the needs of the animals and take good care of them. Once a rescue group has agreed to take an animal, funds for transportation are then raised by a non-profit group, No Paws Left Behind, which is led by a McFarland Animal shelter volunteer, Teresa Walker.

Last week alone a citizen found nine, abandoned, two-week old puppies. Since the shelter is not set-up to accommodate small animals, one of the officers transported the puppies, immediately, to a rescue group in Southern California. Last year, the McFarland Animal Shelter which has limited funding, was able to relocate over 500 animals to rescue groups due to the officer’s dedication – both on and off duty – along with assistance from non-profit rescue groups, volunteers, and donors – such as Scott Watkins!

Scott Watkins is a Realtor from Washington who loves dogs and has a heart for ensuring that dogs who are brought to animal shelters are taken care of and adopted back into society. In fact, his Keller Williams Real Estate team is named Dog-Gone Good Real Estate and his business helps to fund his canine philanthropic endeavors. Scott currently donates to dog rescue groups in Washington, a shelter in Oregon, ‘3 RIVERS HUMANE SOCIETY,’ and three animal shelters in California: McFarland, Wasco, and Delano.

He formed a close relationship with the McFarland Animal Shelter when he adopted a dog from it named ‘Charlie Cigar.’

According to Watkins, Charlie Cigar arrived at the shelter dirty, full of ticks and fleas, undernourished, and extremely ill. The shelter used to be a 100% kill shelter due to lack of funding, thus Charlie Cigar was on the list to be put down the following day. Three female volunteers saw that he was something special and they used their own personal funds to house, clean, feed, and re-vitalize Charlie Cigar. Mr. Watkins found Charlie Cigar through their websites and adopted him, and now they have a very special bond. Scott continued to nurse Charlie Cigar back to health and reunited him with the three women who saved his life including a local 5th grade elementary school teacher, Eve Henderson, by bringing him to her class and surprising her and her students! The surprise visit was captured in a poignant and emotional video which is posted on YouTube.

Scott Watkins strongly believes in the principle – “Don’t shop, Adopt!” He lives out this principle by caring for – what he calls – his “children.” He owns four pets – three dogs who were saved from shelters and one cat.

The McFarland Animal Shelter is now a 99% SAVE shelter – thanks to donors, non- profits, and volunteers, but still lacks the funding to adopt out the animals directly from their own location. They do not have the staffing to accept families at the shelter, but hope to someday!

This Thursday, March 24th and Friday, March 25th, 2016 are the expected install dates for the Big Fogg misters at the McFarland Animal Shelter – just in time for the coming hot summer months!

McFarland’s animal shelter is located in a rural, low-income area. It staffs two animal control officers and does not process adoptions at its location but allows non-profit rescue groups to help get its animal adopted out. Facebook: http://www.facebook.com/McFarland-Animal-Shelter-209972619070791 About Big Fogg Misting Systems

Bigg Fogg Misting Systems enjoys being able to help animals and pets remain cool and comfortable during the hot summer months, so contact them if your local shelter needs a professional grade misting system installed!