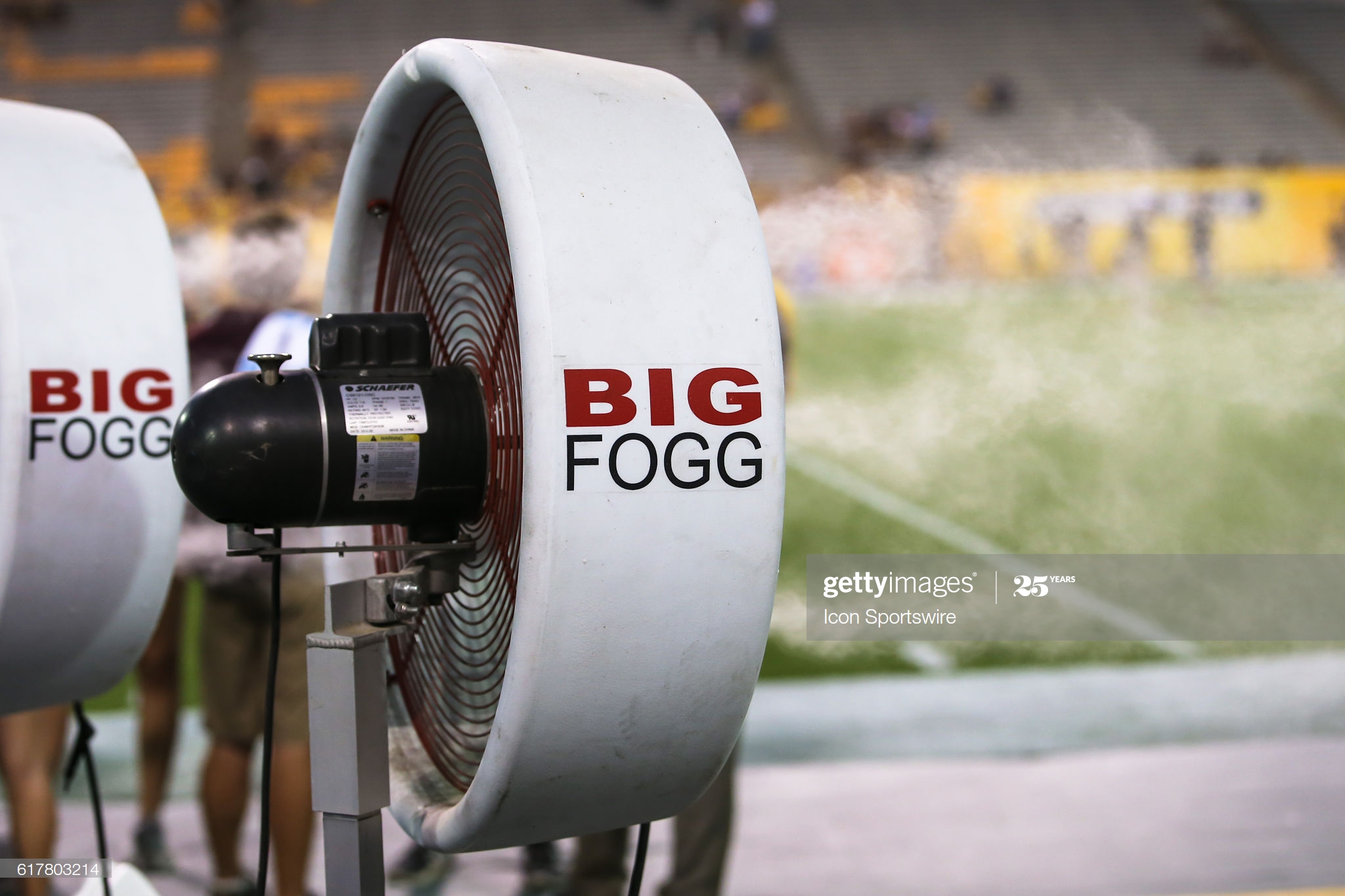 HOW DID SPORTS FIRST USE MISTING FANS TO COOL ATHLETES

The President of Big Fogg, Christopher P. Miehl has often been asked how misting fans first ended up on the sidelines of NFL and NCAA football games. It began years ago, but this story has been repeated so many times that it seems like it was just yesterday. Christopher Miehl recalls that. “It was back in the early to mid-1990s and I had just been laid of my job in Santa Barbara, living in a studio apartment in Balboa., California and trying to earn income by consulting for small businesses. One day, I was introduced to two gentlemen who had developed a backyard low-pressure misting system. The Company I was consulting for was named Cool Zone.

As I was writing a business plan for them, it became evident that their interest in using downtown Los Angeles as a location to start production of these units was not advisable. So a manufacturing facility was located in Hemet, CA. It made good financial sense as it was classified in an economically challenged zone with attractive property tax advantages. On a hot sunny day in June we took a ride to Hemet to look at the plant. On our return trip we drove past a dairy farm. Temperatures were in the high 90s and see noticed that a farmer had taken out a big fan and had placed water emitters in front of the fan face and was cooling down the cows. We laughed seeing another application for misting and joked that the cows were so large they looked like professional football players. Then the idea struck us that misting fans could be placed on the sidelines at football games to cool the players. We could show the company’s name on the fan shroud for advertisement. Consumers would see the name and may consequently buy our little low-pressure misting system.”

Chris Miehl continued “I believe this was on Friday afternoon and. of course if we were busy, we probably would have forgotten the idea. However on Monday we contacted a friend at USC about this concept. He thought it had merit and told us to contact Dino Dennis who was the football team’s equipment manager at the time. Dino liked the idea and we placed misting fans on the USC sidelines for the entire season. This had never been done before as no other team had any type of sideline cooling. After the season ended we received a call from the professional plumbing near me Aloha Bowl in Hawaii. They had seen us on TV on the USC sideline and they wanted our fans for a game, as Hawaii was very hot that year. We shipped our misting fans to the island for the game, which was played during the day. It was great that we were finally paid for the first time for supplying misting fans for a game.

Ironically that year, the Buffalo Bills had just made the greatest comeback in the history of the NFL. After being down 35-3 in the third quarter they had rallied and had defeated Houston 48-45 in overtime. Rusty Jones, who was working with Bills, contacted us to use the misting fans at the AFC Championship Game in Miami. After they won, they hired us to setup for both the Dallas Cowboys and Buffalo Bills at the Super Bowl in Pasadena. I worked that sideline and will never forget seeing Michael Jackson and Garth Brooks perform at half time and OJ Simpson strolling along the sidelines assuring people the Bills would win. The Cowboys did prevail.

Christopher Miehl, President of Big Fogg commented “Now every NFL team and most NCAA teams have some type of outdoor cooling system on the players’ sidelines. Over the last decade Big Fogg has setup its Misting Fans at over one thousand NFL and top NCAA games across the country. We may not be the only company doing sideline cooling on the sidelines anymore but we are certainly the best one”.

Any questions on Big Fogg working the football sidelines across the country please review cindyr10.sg-host.com. BigFogg.com has had its Systems set up at 13 Super Bowl games for at the last 20 Pro Bowl Games.